Are you ready to incorporate Cannabis safely and legally into your holistic practice?

Are you watching as Cannabis and CBD products pop up everywhere around you, and wishing that you could take part in this exciting movement?

Are your clients coming to you with questions that you aren’t able to answer?

Do you instinctively know that there’s more to the plant than just its chemistry, and wish that more people were talking about its energetic and spiritual aspects?

Do you want to be part of that conversation, but are afraid that you don’t know enough or that you could get in trouble if you spoke up?

People often come to us when they’ve tried everything else and nothing has worked. And people come to this plant often for the same reasons. So let’s face it, as holistic health practitioners — whether you’re a clinical herbalist, a health coach, or other kind of healer — you’ve probably been asked at least once about Cannabis.

It can feel tempting to pass the buck, to tell them you don’t have the knowledge or expertise and that they should talk to their doctor, or even their budtender to get their questions answered.

But how would it feel to be a resource in your community and among your clients for their Cannabis related questions? If they felt like not only could they safely admit their Cannabis use to you, but that you would be able to help coach them on using it effectively?

Learn how to harness the magic and science of Cannabis in your practice.

Cannabis has some amazing gifts to offer, and if you’re not incorporating this plant into your herbal, coaching, or other holistic practice, you’re missing out.

It has the ability to help with a wide variety of imbalances and conditions, so a lot of different folks can benefit from it. Regardless of what you specialize in, there’s a good chance that Cannabis can play a role in your practice.

People are excited about Cannabis right now, and because of that it can get people in the door. Once they’re there, you get to have more conversations with them around their health and wellness.

Cannabis is a GATEWAY

And not in the way you were taught as a child. Cannabis can be a gateway into other herbal medicine and wellness practices. Once people see what’s possible with this one plant, it can open up their awareness to, and excitement for, other plant medicine and traditional healing modalities.

Cannabis is a NEEDLE MOVER

It often provides immediate relief so they can start feeling better right away, allowing them more space to work on the deeper issues.

And finally, Cannabis is MAGIC

This amazing plant not only works with our physical bodies in some pretty fascinating ways, but it also has the magical abilities to shift our consciousness, to connect us with things larger than ourselves, and to facilitate profound personal and social transformation.

How would it feel to know that you were helping people get into a relationship with Cannabis that was only healing, but holistic? That used their interest in Cannabis to help guide them — and get them excited about — other herbs, lifestyle changes, and moving their body more.

I mean, honestly, why WOULDN”T you want to work with this plant?

Well, to be fair, I can think of a few reasons you might be coming up with.

If I associate myself with Cannabis, I’ll lose credibility and people will think I’m a stoner.

Cannabis historically has had a stigma associated with it, for sure. But that is rapidly changing, especially with the rising popularity of CBD and the ever-increasing number of peer-reviewed studies that SHOW it’s healing potential. People all over the county are changing their minds about Cannabis as we speak — it really is a totally differenet world than we grew up in.

And you could be part of that change. By welcoming Cannabis into your toolkit, you can:

The more that we, as holistic health practitioners, embrace this herb for the powerful healing ally that it is, the better we can serve our clients. The better we can make use of this amazing resource that’s growing rapidly all around us and be on the cutting edge of our fields.

Well that’s all well and good for folks in California or Colorado, but I live in a state where it’s still VERY much illegal….

Nope, veto. You can STILL work with Cannabis in your practice, safely and legally. Sure, you might not be able to sell your clients Cannabis medicine right now, but you can absolutely talk to your clients about Cannabis without repercussion, as long as you follow a few simple rules.

And the beauty of your situation is that I doubt there are very many other practitioners in your state who are having that conversation right now. And your potential clients are looking for that.

You don’t have to wait until it’s legalized. There are ways to incorporate Cannabis knowledge safely and legally NOW, and get ahead of the crowd before the inevitable legalization that WILL happen in your state.

If this is speaking to you, I’d love to invite you to enroll in my comprehensive training that will help you do exactly that.

Cannabis for the Holistic Healer

In this training, I have brought together the basic science and pharmacology of Cannabis (complete with a TON of academic references) with an understanding of the energetic and spiritual aspects of the plant, rooted in traditional herbalism and delivered with an emphasis on holistic health and wellness. And I do this with specific examples of how you can incorporate this knowledge into your practice.

Here’s how it works:

In addition to lifetime access to 4 hours of video lecture accompanied by 50 pages of detailed written notes with references, you’ll also get access to a private Facebook group where you can get your questions answered and connect with other like-minded practitioners.

Lesson 1: How does Cannabis work?

In this lesson you will learn:

After completing this lesson you will:

In this lesson, you will learn:

In this lesson, you will learn:

Finally, in this last lesson, you will learn:

By the end of our time together, you will feel confident in educating your clients about Cannabis use, and empowered to recommend effective protocols that are accessible and exciting for your clients.

Not only that, but you’ll be able to speak clearly to both the science and the magic of Cannabis — both of which are equally exciting and valid — so that you can connect with your clients no matter what lens they’re more comfortable with.

I first discovered Cannabis, like many of us, as a young teenager and spent years of my life grappling with unwanted side effects and dependency.

For a long time I didn’t think I could use Cannabis in a way that was actually beneficial to me.

That all changed for me a little over a decade ago, when I began to explore the healing properties of this ancient herb. 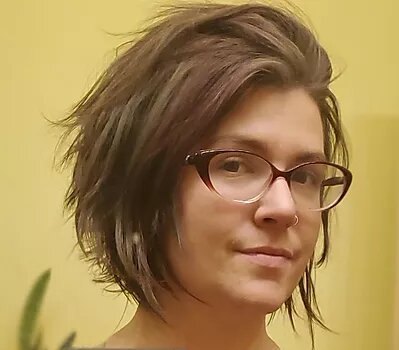 From working on a Cannabis farm in northern California, to working at the ground level of a new medical dispensary in Vermont, I became fascinated with the stories I heard from people whose lives had been changed through working with this plant.

I also saw how confused people were about which forms of the medicine to work with, and how much to take. And I saw a lot of folks in relationships with the plant that were not healing, even though they had the best of intentions.

As a student of clinical herbalism, I also noticed another interesting thing. I would recommend formula after formula to my clients at the student clinic, and probably over half of them never even came to pick them up. Of those that did, they struggled to stick with the protocol I recommended.

But at the dispensary, people came back week after week after week. They were EXCITED about this plant, and went out of their way and made sacrifices so that they could work with it.

That’s when I knew that I wanted to dedicate my practice to bringing Cannabis back into the modern herbalist’s toolkit, and to helping people discover how to work with the plant in the most holistic, healing way possible.

Along the way, I struggled. In my research I encountered a lot of overly academic writing that was almost impenetrable, full of jargon that wasn’t explained properly.

Or on the flip side, I also ran into a mountain of Internet forums with wildly inaccurate information

And in either case, I kept discovering a hyperfocus on the science and the pharmacology of the plant, at the expense of all of its other attributes. The energetic, the spiritual, the magical. This was missing, and it felt like a glaring omission for such a powerful plant ally.

So I created this course. To provide practitioners like you accurate information that is easy to understand, and that embraces ALL aspects of the plant, not just its chemical constituents.

“Stephanie is well informed, an artisan at her medicinal craft, and shared her strong understanding of the science in a thoroughly deep and soulful way. Well balanced, thoughtfully prepared, and full of ease! ” – JoAnne Dennee

“Stephanie has excellent information, and can teach a general audience as well as health practitioners. She is generous with her information and the students love her as a teacher.” – Aracely Brown

Are you ready to partner with this amazing plant ally to exponentially increase your ability to help others?

** Payment plans available, send an email to stephanie@cannabotanicals.net to inquire! **

This course is perfect for you if:

You’re a clinical herbalist, health coach, or other holistic practitioner AND​​​

“[This was a] wonderful introduction to this ancient medicinal approach. Stephanie did a fabulous job, and it was informative, accessible, and fun. It’s all very exciting to me and I am eager to get started.” – Marianne Zarcadoola

“I loved how Stephanie weaved together the art, science, and spirit of the plant in all of her teachings.” – Sarah Brown

** Payment plans available, send an email to stephanie@cannabotanicals.net to inquire! **

Thank you for all your support! Join our mailing list to be first to know about future projects.